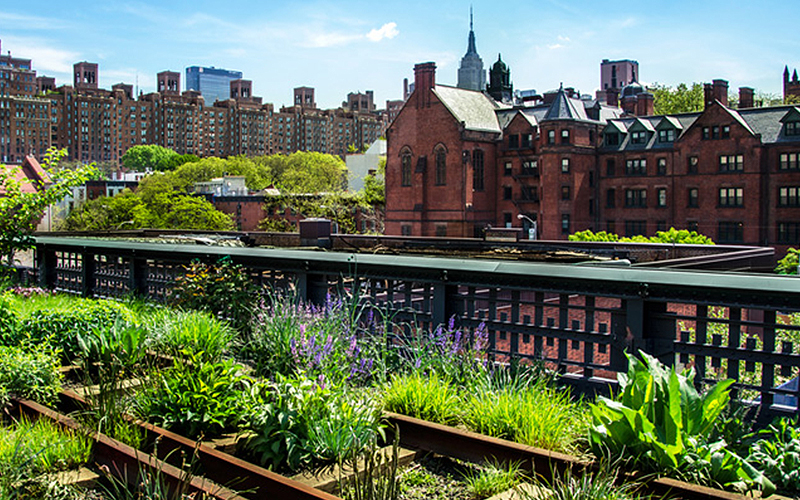 While attending a ULI Conference in New York we toured High Line Park, which is a remarkable example of how to imaginatively repurpose a part of a city’s history.

The park was once the High Line, an elevated railroad track that connected New York Central freight trains to factories and warehouses in Manhattan’s West Side. Opened in 1934, the last train ran on the High Line in 1980, pulling three carloads of frozen turkeys. A group of property owners lobbied for demolition while Peter Obletz, a Chelsea resident, activist, and railroad enthusiast, challenged demolition efforts in court. The first phase of this 1.45 mile-long “linear park” opened in 2009 as an aerial greenway and rails-to-trails park. Second and third phases were added in 2011 and 2014 respectively. The park attracts nearly 5 million visitors annually. A non-profit organization known as Friends Of The High Line creates and produces over 400 free events and experiences for people of all ages.

Our two-hour walk of High Line Park started at the Convention Center in Manhattan's West Side. Storyboards lining the walk tell the story of the project and identify the native plant life now growing profusely throughout the former railroad right-of-way. The site features community gardens public art that have been incorporated with the original long forgotten tracks to create a spectacular, dynamic park. The park provides magnificent views of the New York City skyline as well as the Hudson River. You will also have an opportunity to visit the White Star Pier, where the survivors of Titanic disembarked, as well as the old Nabisco factory, where the Oreo Cookie was invented.

James Corner Field Operations, the NYC-based design firm responsible for the High Line has been selected as the designer of the Seattle Central Waterfront project, which involves removing the existing freeway. Seattle will be the benefactor of the firm’s experience in creating High Line.